Currently, some 55 million Americans are independent contractors — 35% of the U.S. workforce. That’s a significant increase from a decade ago, when only one in five American workers were freelancers. What can we expect the situation to look like in another decade?

To that end, MBO Partners recently published 10 predictions on what freelance work will look like a decade from now, in 2027. We will discuss a few of them here.

By 2027, MBO Partners predicts 58% of Americans will either be freelance workers or have worked as a freelancer before. It seems like a staggering percentage, but keep in mind that the figure includes anyone who has ever taken up a side gig to help pay the bills or even for fun.

The normalization of freelance work is well underway, and it may eventually supplant traditional, employer-based work as the norm.

“Ten years ago, freelancing was seen as for people who couldn’t get a job,” says Gene Zaino, chief executive of MBO Partners. “It’ll become a very commonplace way of working.”

It’s still too early to tell which segment of the freelance workforce will grow at a faster rate: full-time freelancers or traditional employees who opt for gig work. “In terms of dollars, it’ll be full-time. In terms of people, it’ll be the side gig workers,” Zaino explains. “The full-time dedicated freelancers doing that as their sole source of income will remain a larger dollar percentage, but there’ll be many more people [in the freelance workforce overall].”

Freelance, Corporate and Back Again

Rather, more people will “cycle in and out of traditional employment,” MBO Partners predicts. People might take up independent contractor work at times of their lives when flexibility is extra desirable — after having a child or retiring, for instance. On the flip side, they may return to traditional employment when they want to learn certain skills or when a too-good-to-pass-up opportunity comes along.

In fact, Rebecca Karp, a regular contributor to Spend Matters, recently wrote an essay on blending corporate and freelance work and her decision to accept a corporate gig.

“If you’re going to restrict yourself to one model for the rest of your career, are you really independent?” she asks.

“People are working longer,” Zaino says. “[But] after a certain age, they want to not work on a full-time, 9-to-5 basis. The Baby Boomers are probably the first generation that’s been largely knowledge workers.”

Regardless of whether gigs are knowledge-based work, desire for flexibility is a huge factor in why people go freelance. The below chart from the Pew Research Center shows the top reasons people who need or don’t need the income pursue gig work. 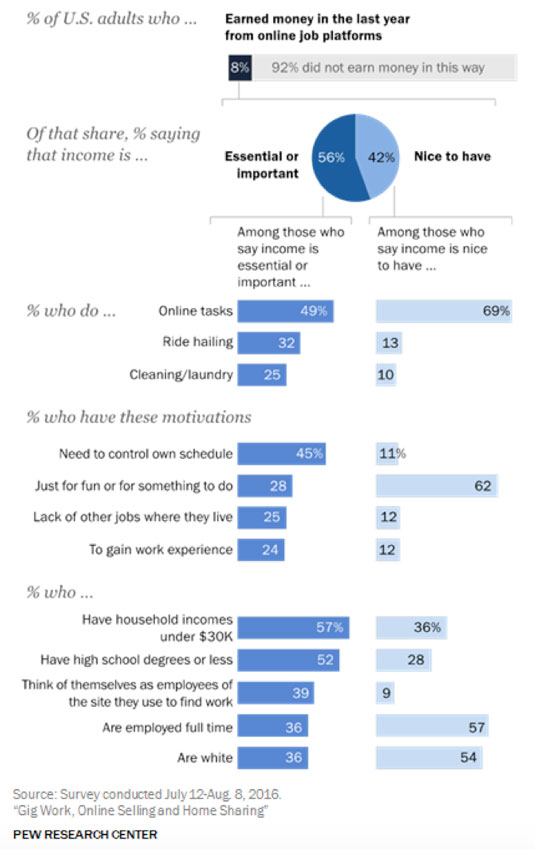 There is already a “barbell effect” in freelance wages, where the highest-paid and lowest-paid ends of freelance work undergo the most significant growth. Could this trend, which MBO Partners expects to continue, make income inequality worse?

“Labor market bifurcation is real,” says Andrew Karpie, research director of services and labor procurement at Spend Matters. “It’s hard to say if freelancing will contribute to this trend, but I suppose there are many ways to construct an argument that it would. But is freelancing, or the increase in contingent or alternative, precarious work arrangements, driven by the economy and behavior of businesses overall?”

“There are still kinks and problems like payment,” he continues. “The whole kind of work model is changing and will change by then in terms of practices and support. There has to be a different set of conditions supporting people doing that, in terms of policy, worker classification, how they get paid, how they get taxed.”

For Zaino, it’s an issue of supply and demand, not necessarily related to the trend of independent contractor work.

What Companies Should Know

But focusing on the higher-paid end of the contractor spectrum, companies will need to be prepared to compete for top talent by offering attractive and flexible compensation packages.

“Labor and services procurement clearly gets contingent workforce and the growing use of it, largely supplier-delivered staff augmentation,” Karpie says. “What it may not yet get is the growing skilled workforce consisting of free agents and its importance to organizations. Processes, technology and competencies are only beginning to emerge to allow organizations to take advantage of this talent. ”

In the short term, Karpie recommends that companies develop the means to accommodate retirees and other “alumni” in independent contractor roles. These roles are likely to involve shorter, smaller projects, requiring sourcing and management approaches, something he likes to call “SOW Lite.”