A USA TODAY investigation finds the Department of Veterans Affairs has repeatedly hired healthcare workers with problem pasts,
like neurosurgeon John Henry Schneider, whose license had been revoked after a patient death.
USA TODAY 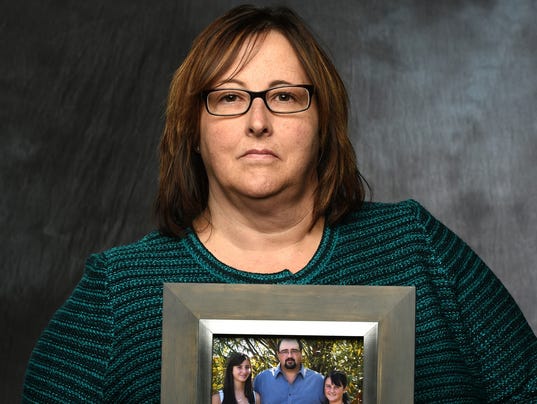 Kathy Monaco poses for a portrait on Oct. 22, 2015, holding a picture of her husband Russ and daughters Mallory, left, and Madison. Russell Monaco died in 2011 at the age of 47.(Photo: Larry Mayer, Billings Gazette)

The Department of Veterans Affairs has allowed its hospitals across the country to hire health care providers with revoked medical licenses for at least 15 years in violation of federal law, a USA TODAY investigation found.

The VA issued national guidelines in 2002 giving local hospitals discretion to hire clinicians after “prior consideration of all relevant facts surrounding” any revocations and as long as they still had a license in one state.

But a federal law passed in 1999 bars the VA from employing any health care worker whose license has been yanked by any state.

Hospital officials at the VA in Iowa City, Iowa, relied on the illegal guidance earlier this year to hire neurosurgeon John Henry Schneider, who had revealed in his application that he had numerous malpractice claims and settlements and Wyoming had revoked his license after a patient death. He still had a license in Montana.

The VA moved to fire Schneider Nov. 29 after inquiries about his case from USA TODAY. He resigned instead. The VA said at the time that Iowa City hospital officials had received “incorrect guidance” green-lighting his hiring in April. The agency conceded this week that it was national policy.

VA Secretary David Shulkin said in an interview that he has ordered the re-writing of the guidelines and launched a nationwide review to identify and remove any other health care workers with revoked licenses.

“It’s very clear to me that our job is to have the best quality doctors that we can provide to take care of veterans, and that’s going to be our policy,” he said.

Shulkin said health care providers with prior sanctions against their medical licenses short of revocation — suspensions or reprimands, for example — also will be reviewed to ensure they are providing quality care to veterans at the VA.

The USA TODAY investigation published earlier this month found that in addition to hiring Schneider, VA hospitals have knowingly hired other health care providers with past license discipline. In some cases, they have gone on to harm veterans.

USA TODAY reported that the malpractice claims against Schneider included cases alleging he made surgical mistakes that left patients maimed, paralyzed or dead, and that his veteran patients in Iowa already have suffered complications. One of those patients, 65-year-old Richard Joseph Hopkins, died from an infection in August after four brain surgeries by Schneider in a span of four weeks.

Schneider denied in an interview that he had provided substandard care and blamed poor patient outcomes on other providers or unfortunate complications that can occur in neurosurgery.

Hopkins’ daughter Amy McIntire told USA TODAY this week that she is furious Schneider was hired in the first place and floored by the national policy that allowed it.

“I’m appalled by the ineptitude at the VA,” said McIntire, a registered nurse who noted that an agency so large has numerous staff to write policies and ensure they comply with federal law. “For it just to be ignored, it’s crazy.”

Nearly 50 members of Congress have called on the VA for answers since USA TODAY’s story ran.

A group of 14 senators from both parties wrote to Shulkin earlier this month asking about the hiring and oversight of health care workers with known histories of malpractice and license discipline. That followed missives from Montana Democratic Sen. Jon Tester and Iowa Republican Sens. Joni Ernst and Chuck Grassley, who said it was “unacceptable that it was only as a result of USA TODAY’s report that the VA determined that hiring this neurosurgeon was illegal.”

On Monday, 31 members of the U.S. House of Representatives fired off letters to the VA secretary expressing “extreme concern.”

“The hiring of doctors who have had their medical licenses revoked in any state is already prohibited,” 30 of the lawmakers wrote, including Democratic and Republican members of the House Veterans Affairs Committee. “However, it appears the laws and regulations establishing that prohibition are not being followed by VA.”

Colorado Republican Rep. Mike Coffman demanded in his own letter that Shulkin launch a nationwide review to identify other VA health care workers with malpractice complaints and settlements or sanctions for poor care. 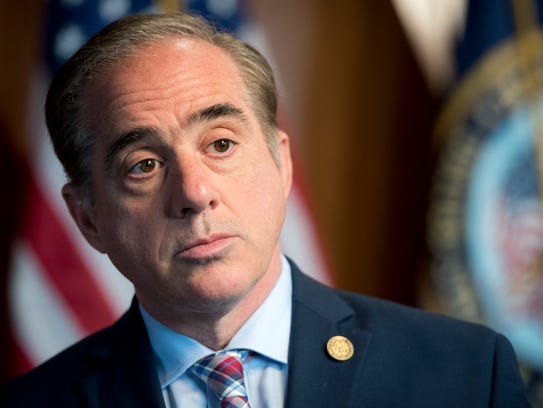 A portrait of David Shulkin, secretary of the Department of Veterans Affairs, in his office at VA headquarters in Washington, D.C. (Photo: Jasper Colt, USA TODAY)

Coffman said in an interview that he worries the VA has become a “dumping ground” for such providers, who may not be able to find work or secure malpractice insurance in the private sector if past claims or discipline render them too risky. The agency doesn’t require medical workers to have malpractice insurance — the VA pays claims with taxpayer dollars.

“The dumping ground for all these folks is the VA,” Coffman said.

It’s unclear exactly how widespread the hiring of practitioners with past problems has been at the VA. But for patients and their family members like McIntire, one is too many.

The national guidelines governing VA hiring have stretched to 1,267 pages with additions and addendums added since their first issuance in 2002. One paragraph, on page 239, gives hospitals permission to hire health care workers with past license discipline, including revocation, despite the 1999 law prohibiting it.

Shulkin said the agency has 66,000 regulations, and he has launched an effort to reduce them by 80 %.

“I don’t know how any organization or any human being could appropriately understand and follow 66,000 policies,” he said. “If we don’t deal with these root-cause issues such as these ambiguous policies, we’re going to see problems like this just pop up over and over again.”

VA officials declined USA TODAY requests to interview Iowa City VA hospital officials about why they hired Schneider, given his record, regardless of policy.