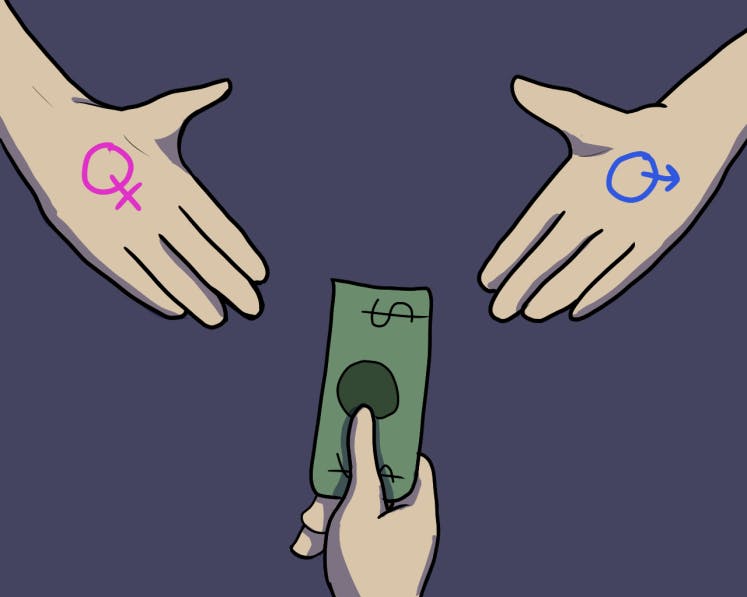 Photo by Ben Lacasse
| The State Press
“What is the gender pay gap? Why does it exist?” Illustration published on Thursday, Nov. 16, 2017.

By Karishma Albal |
2 hours ago

The average woman makes 79 cents for every dollar that the average man earns.

Yes, this is an average across all professions. Yes, although the severity varies from field to field, the wage gap still exists. But no, it is not because women choose to be paid less.

Women are often discouraged from pursuing careers in higher-paying fields and face challenges when it comes to being promoted.

The trend of women pursuing lower-paying careers is visible at ASU, with social work and education programs containing a much higher proportion of women than do engineering or business programs.

Nancy Jurik, a professor of justice and social inquiry at ASU’s School of Social Transformation, said that many job markets are often geared against women.

“There are a lot of studies where they have attempted to statistically control on the level of education, the industry, the occupation, the college major, the hours worked, how much of work life was continuous, and when you do that, there’s still a gender gap,” Jurik said.

While women often end up in lower-paying careers, this is not so much of a conscious choice to be paid less so much as it is the result of years of outside influences and discouragement from these careers.

“I was interviewing a respondent (for research) who was a physician,” Jurik said. “She said ‘I wanted to be a surgeon,’ but in medical school she was discouraged by her teachers from pursuing the surgical line. You’ll have doctors where women are disproportionately going into OB/GYN or pediatrics.”

The influence governing a person’s career of choice starts from a young age, with girls being influenced by their families, marketing and the media.

Computer science, for example, experienced a drop in female employees since 1991 as computers started to be marketed more towards young boys than girls.

This discouragement of women to pursue fields such as engineering or law often follows them through college and into their careers, making it that much more natural for girls to fall into careers that society deems most appropriate for women.

“Girls are sort of channeled into certain types of activities,” Jurik said. “Even if you have women deciding that they want to go into occupations that have traditionally been all male, there are all kinds of ways that they’re discouraged from staying in those occupations. What I saw in terms of corrections was that there was a lot of hazing of women — harassment, being told they weren’t strong enough or that they didn’t have sufficient psyche to be able to survive — they made fun of them.”

Even in careers which are female-dominated, such as education, social work or nursing, women are often not found in leadership roles.

“There was some research done on schoolteachers, social workers and nurses,” Jurik said. “There’s a gender stereotype that men are better managers, and also in education there are stereotypes against men working with little children … But when they bring men into these jobs, even if they have to pay a little more, once they get into these jobs, people are more accepting of paying teachers higher salaries.”

Such stereotypes are harmful on all accounts, and only serves to prove that the work of men in today’s society is valued more than is the work of women, driving women out of fields in which there are traditionally more men.

Still, there is some evidence that the gender pay gap for young women entering the workplace is closing in certain fields.

With new programs at universities such as ASU’s Center for Gender Equity in Science and Technology as well as legal initiatives such as the city of Phoenix’s equal pay ordinance passed in 2015, there is a positive movement towards equal pay for every individual.

Editor’s note: The opinions presented in this column are the author’s and do not imply any endorsement from The State Press or its editors.

Want to join the conversation? Send an email to [email protected] Keep letters under 500 words and be sure to include your university affiliation. Anonymity will not be granted.