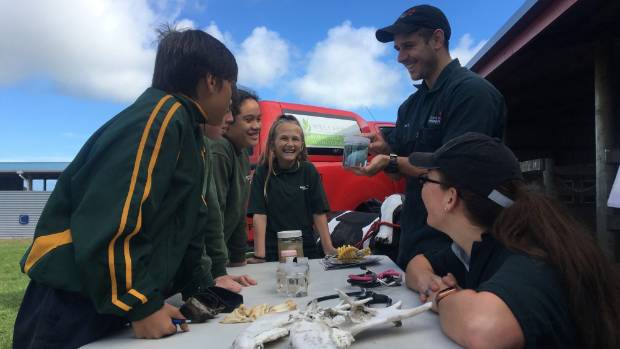 Tori Turner gets students from Hāwera Intermediate excited about veterinary science during an agri-food careers day.

From taste testing red meat to learning the finer points of artificial insemination, students from Hāwera Intermediate got hands-on experience at an agri-food careers day.

Close to 300 students from the South Taranaki school took part in eight practical modules at the Hāwera Showgrounds on Wednesday.

The year 7 and 8 students spent time with vets, farmers and agribusiness professionals and were keen to learn, teacher Larni Martin said. 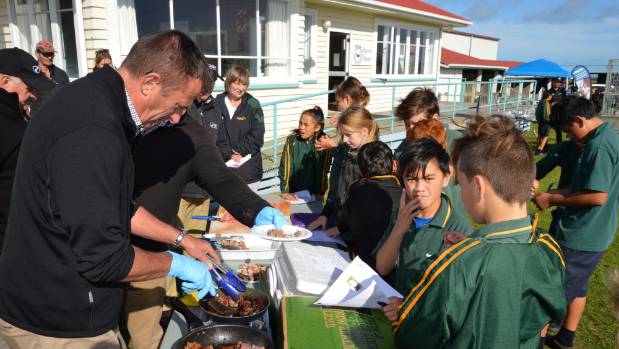 “The kids have been really engaged.

“The artificial insemination module was a hit among students. They all had a laugh and many were quite curious about reproduction.” 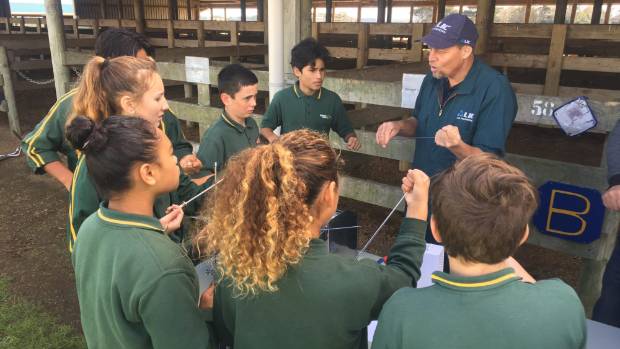 The module was a favourite for year 7 student Juana Potts-Julian.

“Today was a lot of fun. I’m really keen to get job in the dairy industry,” she said.

Vet Tori Turner urged students to develop an interest in science if they wanted to be a vet.

“Studying all three sciences – chemistry, biology and physics – will help you get into Massey University where vets train,” he said.

“[Being a vet] is like a bit of a puzzle because humans can say where they’re in pain, whereas animals can’t.

“So we have to do a full examination to find out what’s going on with an animal, which can be quite difficult at times.”

The event, funded by the Red Meat Profit Partnership (RMPP) and delivered by NZ Young Farmers, was part of a national project which aimed to get students from 100 schools on to farms by July.

“Taranaki has had one of the biggest programme uptakes but we’re getting more and more schools wanting to be involved as the deadline approaches.”

Although schools usually sent about 100 children on each farm visit, Hāwera had been different, Kingma said.

“We usually take the students to the farm but Hāwera had 290 kids and wanted them all to take part so we’ve put on a mini A&P show for them instead,” she said.

The nationwide programme had been popular with students from both rural and urban areas and was an eye-opener for many, Kingma said.

“City kids are just as enthusiastic as the country kids.

New Zealand’s red meat sector will need to find an extra 33,000 workers by 2025 to replace people who will retire or exit the industry.