A nurse who works at the province’s only high-security mental health facility has formally complained to the Nova Scotia Labour Department, asking for an investigation into whether the East Coast Forensic Hospital is a safe workplace.

In a letter sent to the department yesterday, the complainant said she is frustrated that little progress has been made to fix security problems identified in the weeks before another nurse was “brutally attacked and almost lost her unborn child” earlier this year.

That attack, which happened in April, sent the registered nurse to hospital. She was 33 weeks pregnant at the time and was forced to take leave from her job early so the health of her baby could be properly monitored.

A 28-year-old woman was subsequently charged with for aggravated assault and threats.

‘Bogged down in bureaucracy’

“The problem is that the Nova Scotia Health Authority is bogged down in bureaucracy,” he said Friday.

One of the issues is existing security cameras in the facility have blind spots.

MacLean said the possible fix is still months away.

“People are fed up.”

Another issue is panic alarms. The nurse who was assaulted was carrying a panic alarm in her pocket at the time of the attack, but it was her screams that alerted staff she was in trouble.

The union said it raised concerns about the panic alarms in a report to the health authority on Feb. 23. The report noted that the alarms are triggered by using a slide button, but the masking tape used to hold the alarms together prevented the slide button from being easily activated, the union said at the time. 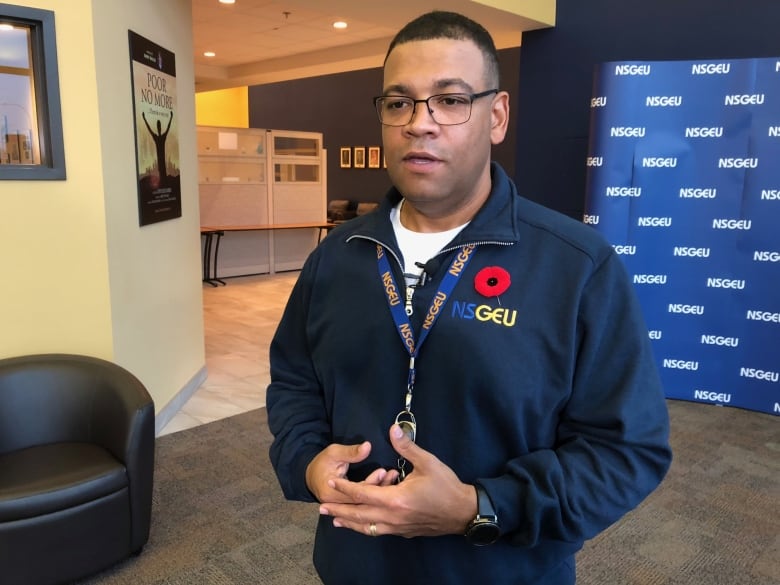 According to the letter from the complainant, who is a licensed practical nurse at the forensic hospital in Dartmouth, N.S., she raised concerns a week before the attack to a Nova Scotia Health Authority safety officer during a health and safety meeting.

The complainant, the union’s representative on the occupational health and safety committee, writes that the officer “dismissed my concerns” and stated having “an independent expert conduct a violence-in-the-workplace risk assessment would be a ‘waste of time.'”

Despite talks between her union and the Nova Scotia Health Authority, the complainant is convinced steps to remedy the situation “have been exhausted.”

Carmelle d’Entremont, a vice-president at the health authority, refutes the claim little had been done.

In an email, she wrote: “Prior to and following the incident at East Coast Forensic Hospital in which a nurse was assaulted, hospital managers and NSHA Health, Safety and Wellness staff have worked together with facility staff and the union to hear and address workplace safety concerns.

“In addition to conducting its own review as per legislation, NSHA has also participated in a Department of Labour and Advanced Education review following the assault incident and complied with all resulting orders.”

Complainant calls for expert to be hired

The nurse who complained formally is calling for the health authority to hire an expert to help the East Coast Forensic Hospital identify “every reasonable safety control available.”

She wants an investigation by the labour department “to ensure that the event that almost took the life of one of my colleagues never happens again.”

The NSGEU provided CBC News with a copy of the nurse’s letter but removed any names in order to protect the privacy of those people.