A great grab in Perth by Australia paceman Josh Hazlewood confirmed the writing was on the wall for England batsman Alastair Cook.

The visitors’ cultural issues will feature prominently in the English board’s Ashes post-mortem with coach Trevor Bayliss having already warned that players’ futures are at stake.

A match that Cook described as “the biggest game of our lives” has turned into a nightmare for the visitors, who need a miracle, or a deluge, to avoid surrendering the urn on Monday. 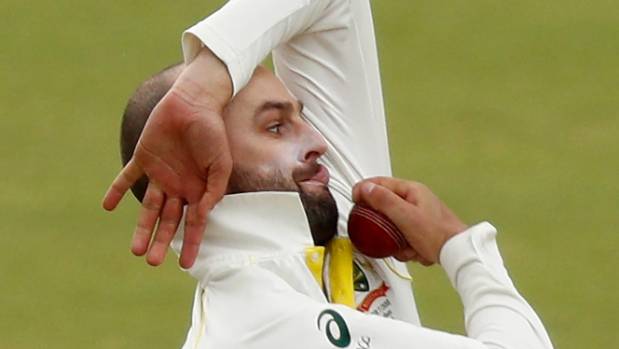 Australia spinner Nathan Lyon predicted that this Ashes series would be the last for some England cricketers,.

Joe Root’s plea for his senior players to stand up for their country has fallen on deaf ears. Needing to survive multiple sessions to save this test, the team’s two most experienced batsmen – Cook and Root – fell cheaply on another torrid day for England in Perth. 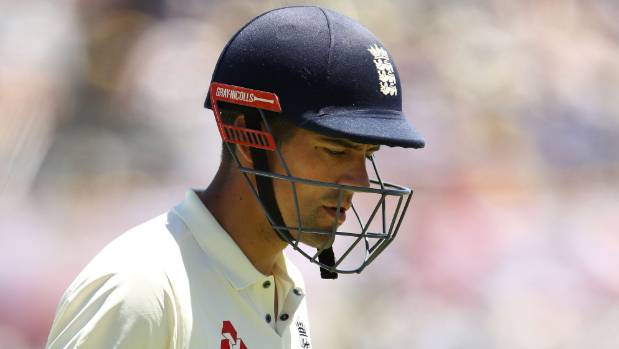 England opening batsman Alastair Cook has struggled to buy a run in this Ashes.

“We’re very happy, we’ve put importance on those couple of wickets at the top and it puts more pressure on the middle order who are a bit more inexperienced,” Australian seamer Josh Hazlewood said.

Root completed a dismal game when he was caught at slip for 14 off a deflection from the wicketkeeper’s gloves. Adding insult, he was snaffled by opposing number Steve Smith, who is having a series as memorable as Root’s is forgettable.

James Anderson inflated his figures with four scalps in junk time but lacked penetration when Australia were under pressure. 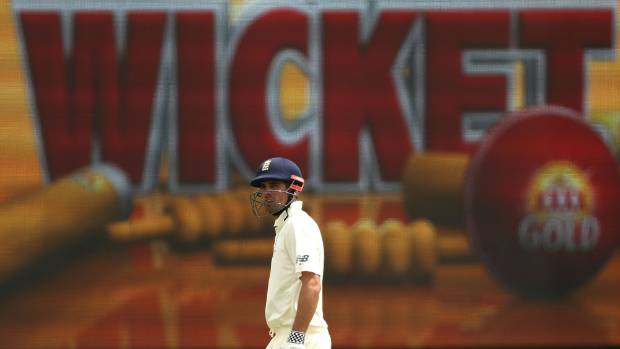 The writing appeared to be on the wall for England opening batsman Alastair Cook.

Stuart Broad failed to land a consolation wicket and has now gone 54 overs since his last breakthrough. Only 11 players have conceded more runs in a wicketless innings than his 0-142, which were the worst figures of his career.

There is nowhere to hide after Ashes failures as recent history suggests. Star players Kevin Pietersen and Graeme Swann never played again after the whitewash while Jonathan Trott was not the same batsman. Coach Andy Flower was also a victim of a disastrous campaign.

The debacle in 2010/11 proved to be Ricky Ponting’s last series at the helm while Simon Katich and Marcus North also had their careers ended.

Australian paceman Josh Hazlewood says sometimes the spectacular dives are easier than the ones that come right at you.

Cook is in danger being the highest-profile casualty. Questions have been raised if his heart is still in the game though his willingness to train suggests it still is.

With Cook in the midst of a lean trot stretching back to late last year, the decision may not be his to make.

The one-time run machine has scored just one century and passed 50 only three times in his past 27 innings. For the first time in his decorated career he has gone 10 knocks without a half-century, though his supporters will point to his 243 against the West Indies six tests ago. Australia captain Steve Smith (left) and team-mates rush to Nathan Lyon (centre) after the spinner snared the wicket of England captain Joe Root in the second innings of the third Ashes test, in Perth.

“It’s been an issue since his double century against the West Indies. He’s just out of form,” former England captain Michael Vaughan said on BT Sport.

“I still think he’s got a couple of years left in the side. Cook’s had these spells before. Eventually there will be a moment where he decides enough’s enough.

“I haven’t seen anything to tell me he’s lost his desire, he’s just going through one of those spells against a good Australian attack.”

Cook completed a miserable 150th test with a second cheap dismissal, falling for 14 to a sharp caught and bowled chance by Josh Hazlewood.

On another day, Cook may have been reprieved or had his shot fly wide of the fielder, which would have masked a technical deficiency, highlighted by former teammate/nemesis Pietersen.

England’s struggles could work in the favour of Cook, who turns 33 on Christmas Day. They have taken five years to find a replacement for Andrew Strauss. Their next mission is in seam-friendly New Zealand, which is not an easy place for a newcomer, and with selectors unlikely to move him on mid-series, Cook potentially has four more chances to save himself.