The mother of a London man who died after being electrocuted on the job hopes the province makes occupational health and safety training mandatory for all Ontario high school students. 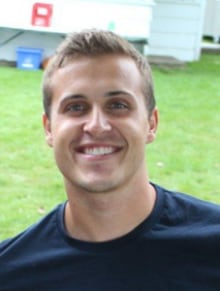 Jeremy Bowley, 21, died on Aug. 1 2013 while erecting a tent for Signature Event Rentals. He was electrocuted after a tent pole touched an overhead hydro line, killing him and injuring two others on his work crew. (Elisa Kilbourne)

Elisa Kilbourne’s son Jeremy Bowley died on August 1, 2013 after he was electrocuted while erecting a tent while working for Signature Events Rental Shoppe.

The 21-year-old university student was killed when a tent pole came in contact with an overhead hydro line, killing him and injuring two other members of his work crew.

The coroner’s inquest into Bowley’s death wrapped up on November 24 and the jury made eight recommendations, among them was to ask the province to review its mandatory curriculums to ensure that all high school graduates get occupational health and safety training, understand their rights on the job and know their risk as “vulnerable employees” entering the workforce.

“I’m thrilled by that one in particular,” Kilbourne said, noting she would like to see the recommendation taken even further by asking the Ontario government to make workplace safety a mandatory course in high school, starting as early as grade 10.

There has been no indication from the Ontario government on whether it would create such a course, but London West New Democrat MPP did push the Liberal government to act on the eight recommendations made by the jury in the coroner’s inquest in Jeremy Bowley’s death.

In the case of her son’s death, Kilbourne doesn’t believe that any one person was responsible, or should be blamed, but Bowley’s mother doesn’t think the current penalties for unsafe workplaces have enough teeth.

“I think there are cases where there has been so much neglect it would be absolutely warranted,” she said, noting that in her son’s case, she believes jail time would not have been appropriate.

Signature Events Rentals was fined $100,000 by the Ontario Ministry of Labour in February, 2015 in connection with Bowley’s death, after the company pleaded guilty to failing to ensure that the health and safety of its workers were protected and failing to provide adequate health and safety training.

Workplaces can be deadly

Kilbourne would rather see the both the provincial and federal governments so something to educate workers and companies in how to prevent workplace deaths in the first place, which in Canada were 852 in 2015, according to the Canadian Centre for Occupational Health and Safety.

“If we’re having two to three people in Canada die every single day and most of these situations are preventable, then why is this happening? It doesn’t make sense that we have that many people dying and there isn’t something happening.”

So far this year, at least 21 workers have died on the job in Ontario and a new coroner’s inquest has been announced in connection with the death of a 55-year-old workers in St. Thomas.

Kilbourne has some advice for his family in order to deal with what’s to come.

“This is your time to ask questions,” she said. “If you’re not feeling up to asking questions yourself, then have someone ask for you. This is your chance to get those answers.”