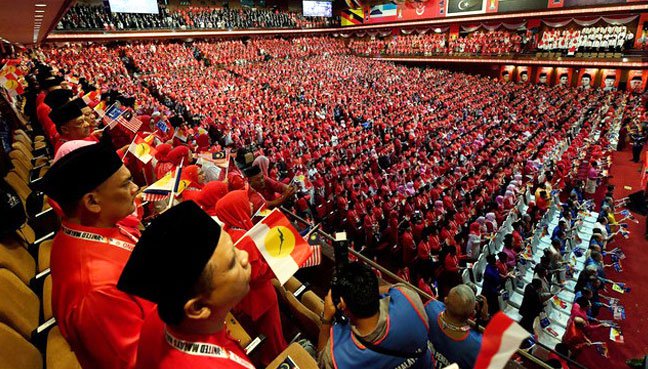 The kind of massive corruption and abuse of power that went on during the last couple of decades was not just the work of one man.

Any hopes that Umno would somehow be able transform itself into a viable political party in keeping with the hopes and aspirations of the people evaporated last Sunday after Ahmad Zahid Hamidi and some of the worst, least credible leaders of the former government were elected to helm the party in the post-GE14 era.

While polls suggested that the wider Malay polity favoured more open-minded and reformist leaders like Khairy Jamaluddin, party bosses went with the status quo. Money politics was also apparently at work once again.

Without principle or honour

What we now have as the face of Umno are the same people who were Najib Razak’s principal cheerleaders and collaborators, his proxies in effect.

To see the very people who were complicit in all that went wrong during Najib’s administration now strutting around talking about democracy, professing their respect for the rule of law and complaining about money politics, is simply revolting. And to watch them pretend that the massive corruption and abuse of power that attended their long years in office was somehow a minor detail, or that they lost the election merely because of the “non-conventional approach” taken by Pakatan Harapan (to quote Zahid) is to witness monumental self-deception first-hand.

The fact is, the kind of massive corruption and abuse of power that went on during the last couple of decades was not just the work of one man – it was a team effort in every sense of the word. Every last one of them aided or abetted Najib by commission or omission. They lied or remained mute witnesses when they should have spoken up. They obfuscated the truth and consciously misled the public to the very end, and continue to do so even now.

How many of them now trying to refurbish their image would even dare declare their assets?

Zahid himself, now under investigation on a number of issues, deceived the public when he claimed to have met the mysterious Saudi who supposedly donated RM2.6 billion to Najib. And now, in response to allegations that some RM800,000 in personal credit card bills were charged to his foundation, he says it was all an honest mistake. Perhaps, but what people want to know is how does a politician rack up RM800,000 in credit card bills in the first place, and then pay it off without so much as a second thought?

And then there was the shocking re-election of Jamal Yunos, a racist demagogue given to empty-headed gestures and a fugitive from justice to boot, as division chief. What does it say of Umno if such obnoxious people can find favour within its ranks?

What we have then, for the most part, are leaders without principle or honour, and without an iota of remorse for all the wrong they did. They betrayed the trust of the people and their obligation to protect and defend the constitution.

Entrusting the leadership of the party to the same bunch of unprincipled and opportunistic leaders that were rejected by the voters on May 9 only suggests that Umno members still do not appreciate the full measure of the disdain in which many ordinary Malaysians hold their party.

In the hands of such men, nothing more can be expected from the party than the racism, bigotry and dishonesty of the past. In a harbinger of things to come, Najib, their mentor, disgraced and rejected as he is, is claiming that the PH government is neglecting the Malay agenda, sidelining the national language, and undermining the position of the Malay rulers.

And this despite the fact that nobody, absolutely nobody, has done more to damage the interests of the Malays than he and his party. They pretended to be defenders of the faith but defrauded the faithful; they claimed to champion their race but massively cheated their own people.

What Najib and Umno cannot and will not see is that PH’s election victory was in fact a victory for the Malays by the Malays. Finally, the Malays have rid themselves of the “bangsats” that entrapped and impoverished them in the dead-end politics of race and religion while laughing all the way to the bank. Under more progressive Malay leaders, the Malays themselves are now free to soar like never before. And the higher they soar, the more irrelevant Umno will become.

History, it is said, has a way of catching up with the follies of men. The moment party leaders rejected Onn Jaafar’s proposal to make Umno an inclusive big tent party fighting for the rights of all Malaysians, it sowed the seeds of its own destruction. While many pretended for years that there was something noble in its struggle, there was, in fact, nothing redeeming about its racist approach to nation-building.

The final chapter in Umno’s sordid saga is now being written by the investigators looking into all the allegations of its corruption and abuse of power. When it comes to full fan, many more Umno leaders will be joining Najib in infamy, and the insidious nature of Umno will be laid bare for all to see with devastating consequences.

Dennis Ignatius is a former ambassador.