It is no secret how competitive it is to get most jobs and one of the ways to secure a job is to make your resume stand out at the beginning of the job application process. There are multiple steps you can take to improve your resume. Tailor your experience and skills to a specific job position or company. Change out your cover letter to personalize the resume for different applications. Another way to improve the chances of your resume sticking out to hiring managers is to editing your resume by including keywords or phrases that will make your resume. 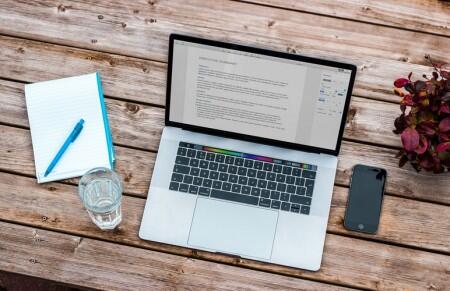 Photo by Bram Naus on Unsplash

These words and phrases are suggestions – take them in as they will vary between different people and their various experiences and skill sets. While a phrase listed may sound appealing and you may want to stick it somewhere on your resume, you definitely do not need to include the word or phrase if it doesn’t apply to you specifically. Remember that these phrases are to make you and your actual capabilities stick out, use them as a way to draw attention to your ability to fill the position, not as a way for false advertisement. Read on to find what phrases or words you can use to make your resume stand out in your next job application.

Make your resume stand out to hiring managers by showing just how much potential you are bringing to a company by filling the position you are applying for. When describing your past work experience in your resume, include the word “improved” in at least one phrase, or even more. By including “improved” when you describe your past work experience, you are showing that you are able to work with a position and its expectations, while also using your own skills to better the position and company you are working at.

There are many ways to include “improved” on your resume, depending on the type of job position you are applying for. If you have worked with sales, you can try including “improved sales tactics” and support your claim with numbers if you have the means to do so. If you have worked with certain programming, you can try including “improved team’s ability to use program daily.” Remember that the inclusion of “improved” is to enhance what you have already accomplished, so be ready to discuss the accomplishments if they are brought up along the hiring process, or even after.

List out specific hardware or software you are experienced in

Think of how unimpressive listing out “computer skills” on your resume could be – and how specific programming will have better chances of catching the attention of hiring managers. The more obvious and likely choices to include would be programs associated with Microsoft Office: Outlook, PowerPoint, Words, Excel, and so on. It will not hurt you if you continue to list specific hardware or software on your programs – it will just show how experienced you are with the programs.

To take it one step further, pair the software and hardware you include with specific achievements or tasks you have done with the programs in different job descriptions. Maybe you are used to designing graphics for advertising in Adobe Photoshop, or creating sales pitches in Microsoft PowerPoint. If you back-up your skill sets, you will help make your resume stand further out.

The inclusion of “managed” on your resume will help make your resume stand out to hiring managers, and there are plenty of ways to include the word to improve your resume. This keyword is especially helpful if you are applying for a management position, or a position that requires you to lead a team effectively. The keyword can also relay several things: organization skills, task management, leadership skills, and more.

If you are able to say “managed a team of seven to meet monthly goals” and provide numbers – it will catch the attention of hiring managers while also reinforcing your capability to fill the position you are applying for.  This phrase can also be used for social media skills, like “managing social media company social profiles,” which will show that you are capable of multi-tasking and social media engagement.

These phrases are just a few of many that can be used to make your resume stand out during your next job application. Remember that they are not one-size-fits-all and there are different keywords or phrases to highlight different careers, experiences, and skills. Best of luck!