Jagmeet Singh is the next leader of the federal New Democratic Party of Canada, taking more than the 50 per cent of the votes in the party’s federal leadership contest.

Speaking after his election win, Singh said the party owed a debt to the former leader Tom Mulcair whom Singh credited with helping the party through a difficult time after the passing of Jack Layton.

Singh also thanked all of the campaign teams that helped him and the other candidates in the race.

“None of this would have been possible without my colleagues in the leadership race,” Singh said.

“From Tommy to David to Audrey, Alexa, Jack and Tom, and today, to all of us, we are the party that is building a better Canada. It is in us that you can see the future of our country, how great our country will be with a New Democratic government,” Singh told reporters in Toronto.

“Imagine what we can build together, all of us, in two years.”

Singh also tapped into his family’s past financial struggles to make the case for ending job insecurity and precarious work — a pledge he made while campaining.

“While I was in university, my father became very ill and my father was unable to work. We needed to pay the bills, so in my 20s I became the sole income earner in my family,” he said.

Singh explained that he was forced to take care of his younger brother — making his meals, buying his clothes, sending him to school and even showing up for parent-teacher interviews — until his father was well enough to return to work.

“We were lucky to find a way out of this precarious situation, but many people don’t. Many people face far more difficult struggles,” he said.

“I caught just a little glimpse of the pressure they feel, the weight of living paycheque to paycheque knowing the consequences of falling short, letting your family down and losing the basics like shelter, food and education.

“That’s why it’s unacceptable for the government to tell people to just get used to unstable work.”

As an Ontario MPP, Singh worked to end the practice of carding: when police officers stop and question citizens, gathering information that is then stored indefinitely in a secret database. Critics have blasted it for targeting young black men and other ethnic minorities. The Ontario government eventually banned the tactic.

Singh brought the issue up again Sunday evening in his acceptance speech, positioning himself as someone who will continue that fight at the federal level.

“Growing up with brown skin, long hair and a funny sounding name meant I faced some challenges,” Singh said. “I’ve been stopped by police multiple times for no other reason than the colour of my skin.

“It makes you feel like you don’t belong, like there’s something wrong with you for just being you. And that’s why, as prime minister, I will make sure that no one in Canada is stopped by police because of they way they look, or the colour of their skin.”

Launching his next campaign

Saying he launched his leadership to make progress on issues such as income inequality, the pay equity gap, housing affordability, climate change, reconciliation and electoral reform, Singh pledged to ensure no one in Canada is stopped by police for the colour of their skin.

Singh also explained how he decided to learn how to speak French because he wanted to form a bond with Canada’s francophones and pledged to respect and protect French as he readies for the next big fight in his political career.

“I am officially launching my campaign to be the next prime minister of Canada,” Singh said. “Thank you my friends, we are going to do this together.” 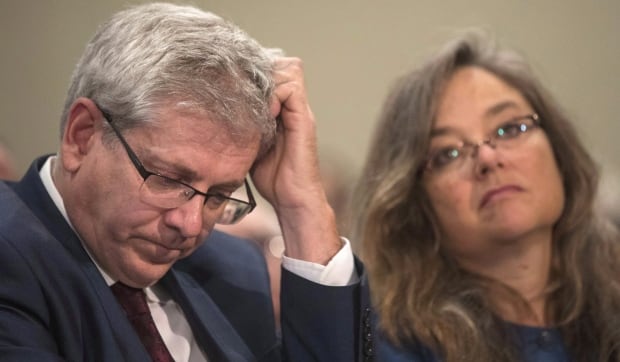 Angus at the reading of the first ballot in the NDP leadership race in Toronto on Sunday. Angus came second to Singh who 53.8 per cent of the vote to be elected the new NDP leader. (Chris Young/Canadian Press)

Angus and Singh were widely seen to be neck and neck for the party’s top job going into Sunday but when it was all over Angus secured only a third of the votes Singh did to win the contest.

While Angus, 54, is a household name among party loyalists and a fixture in the House of Commons. Singh, 38, represents a younger, more suburban wing of the party.

Singh has said he will not immediatly seek a seat in the House of Commons, but will use his time outside Parliament to speak with people across Canada about the issues that matter to them.

He will likely have to appoint someone to speak for him during question period in the House and appoint leadership positions within his caucus. There were no announcements on those fronts on Sunday.

Peggy Nash, a 2012 leadership candidate and former MP, said the naming of a new leader is the perfect time to turn to the myriad other significant challenges the party is facing — many of them financial.

According to Elections Canada, the NDP is carrying $5.5 million worth of debt, and its fundraising mojo has been virtually non-existent.

“Knit together the teams that may have supported different candidates,” Nash said. “Get out there and build the party and restore our voice as the legitimate voice of progressive Canadians.”

More than 124,000 card-carrying members were eligible to vote for the new leader, either online or by mail. The ballot was preferential, meaning voters ranked all four candidates in their preferred order.