Some citizens and councillors in Cape Breton Regional Municipality are upset with the mayor, saying he is blurring the lines between his civic duties and his broader political ambitions.

The criticism arose after the mayor took his executive assistant’s son, a volunteer on his leadership campaign, to an event in Halifax hosted by Fort McMurray, Alta., officials.

The officials were grateful for CBRM fundraising and support following a wildfire fire that swept through their northern Alberta community two years ago. They were in Halifax for the recent Federation of Canadian Municipalities conference.

A couple of citizens who are longtime critics of the mayor saw a picture of the event and asked on Twitter why the son of Clarke’s executive assistant was at a CBRM event. They also questioned if it was appropriate.

The online exchange drew in a couple of other citizens and two CBRM councillors, most of whom were critical of Clarke. 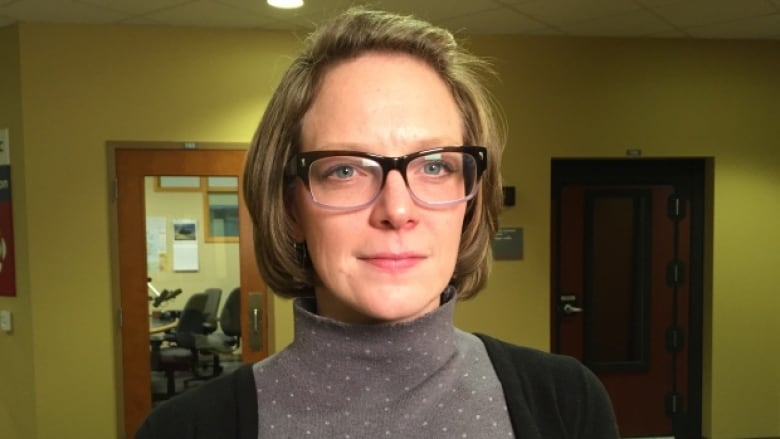 Coun. Amanda McDougall says she wants clearer boundaries between the mayor’s civic duties and his PC Party leadership bid because his political ambitions are distracting from municipal issues. (CBC)

One of the councillors, Amanda McDougall, replied on Twitter saying it was upsetting that Clarke had shown “a complete lack of morals” by bringing a campaign member to a municipal event.

McDougall, a first-term councillor who’s been at odds with the mayor in the past, said she used strong language because she believes Clarke crossed a line.

“Having a guest from your leadership team when you’re the mayor of the municipality, we have to set boundaries where one role doesn’t spill into the next,” she said.

The criticism wasn’t a personal knock against Clarke’s campaign team member, McDougall said, but the issue became a distraction from municipal issues.

‘How can his time be divided?’

“I don’t like talking about the leadership campaign, quite frankly,” she said. “I hate that it spills into my daily work. The only reason I will talk about it is because it does end up impacting me.

“So when residents are continuously calling, when they are constantly on social media inquiring, ‘Where is the leader of our municipality? What’s going on? How can his time be divided?’ That’s the only issues I’ll speak to.”

Clarke said he has no problem keeping his civic duties separate from his other political aspirations.

Clarke sees nothing wrong with having a volunteer attend what he considered a minor, unofficial event. He said the young man was simply his guest whose only duty was to take a picture, and not for the PC campaign, but for the mayor. 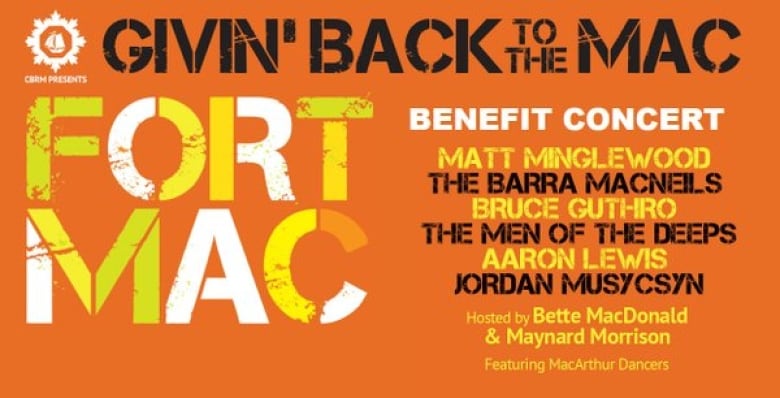 CBRM hosted a concert at Sydney’s Centre 200 last year as a fundraiser for people displaced by a wildfire in Fort McMurray, Alta. (Cape Breton Regional Municipality)

“We’re not talking about coming in and trying to sell membership cards, when you’re there to do an off-site event organized by another municipality about Canadians caring for Canadians, and someone’s there just to take a picture,” he said.

“If that’s what we’ve reduced politics to, then I would say that I regret it for the people that find that a negative.”

Clarke said he doesn’t regret taking his assistant’s son along. Instead, he questioned his critics’ motives.

“It was two groups of people getting together to celebrate the response of people caring and to the tragedy in the fires in Fort McMurray,” he said. “It was a non-official event, an informal opportunity, and I regret that people want to politicize it. I would look at the other side and say what’s the real agenda of the people making an issue out of this?”

One of Clarke’s leadership supporters hinted online that at least one of the citizens complaining about the mayor was on a rival leadership contender’s campaign. Others have said that everyone knows Coun. McDougall is just gearing up for a shot at the mayoralty.

“Social media is a really interesting place,” she said. “There was an article a number of months ago put out there suggesting that I put my name forward. At this moment, I have no intention of running for mayor now.”

It’s more a conflict of time and attention to the voters who elected someone specific to do a specific job, she said.

“There’s the sense of, ‘Are you still working for us if you’re busy doing this other thing?'” Turnbull said. “It’s not automatically the case that somebody has other activity that it’s an ethical problem. But it can be seen as a problem politically if people are expecting you to be visible and hard at work for your constituents, but yet clearly your mind is on something else, too.”

In terms of ethically, in terms of legally, I am not saying he has done anything wrong. But politically it’s a tough spot.– Dalhousie political science professor Lori Turnbull

Clarke has not missed a CBRM council meeting since launching his party leadership bid and has been present at several municipal events on days when he’s also been campaigning elsewhere in the province.

Turnbull said it’s entirely possible for Clarke to budget his time and keep the different roles from blurring, but sometimes that’s not enough.

“Politicians serve at voters’ pleasure and sometimes there can be, in a complete absence of [a] legal or ethical problem, there can be a political issue that crops up and if the politician can’t figure out how to put it together, then yeah, you’ve got a problem and it will endure.

“But it’s the perception versus the reality that’s an issue. Voters don’t necessarily want to think, ‘OK, he or she is my elected representative, but their waking hours are really consumed by something else.’

“It might create the perception that your time is being split in ways that must be awfully difficult and perhaps not really possible. You can do it in practice, but it looks difficult.”

There’s no real remedy for that perception either, said Turnbull. If politicians are forced to resign to seek another office, potentially good candidates might not run in the first place.

Forcing them to take a leave of absence is also problematic, she said, because voters put a specific person in place for a term and it wouldn’t be fair to have no representation or a substitute for a length of time.

Turnbull said engaged citizens and the media have a role to play in keeping politicians honest.

“People see what’s going on, they tweet about it, they make it an issue, so accountability is, I think, quicker and more public than it used to be because of social media.”